A career spent caring for our makua 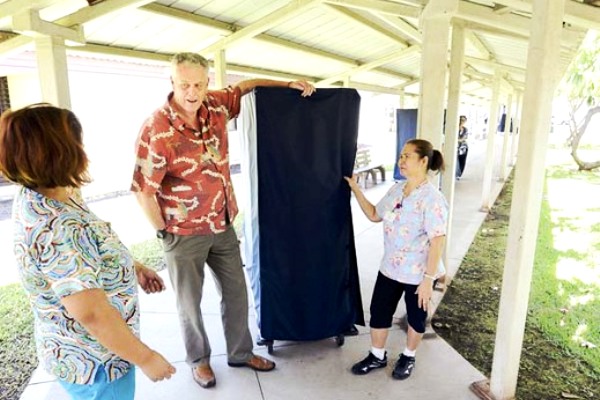 Tony Krieg will retire from Hale Makua Health Services in October after 35 years with the agency, including 30 years as its chief executive officer.

"I'm gonna miss the staff," he said last week of the nurses aides, housekeepers, maintenance personnel and nurses who work hard "with a smile on their faces" to provide care for frail elders and to help people recover from illness, traffic accidents and strokes.

But, "it's time for me to move on to another phase," said Krieg, 68, who said he plans to move to Oahu to spend time with his wife and son, who recently graduated from high school. He emphasized that he will be traveling back to Maui from time to time to visit two daughters and two grandchildren who live here.

Krieg retires as the nation's long-term care system faces the rising demand from the baby boomer generation, now "the largest group on the planet at the moment," he said.

The first wave of baby boomers began hitting the long-term health care system about five years ago, he said, and now a small percentage of people is using most of the health care resources in the country.

"Families, especially in Hawaii, are shouldering that burden," he said.

To meet the need and do so affordably, there's an ongoing trend toward having more long-term care based in homes or in the community, rather than at an institution, he said.

But Maui's affordable housing shortage is making it difficult for seniors, especially those from low-income families, those with young adults at home or for homeless people, to be discharged to a private home, he said.

"I'm really concerned about that," Krieg said. "The lack of housing for families is having an impact on whether we can move people out of a nursing home - those who don't need nursing home care."

Krieg has seen long-term health care evolve from being a nursing home for frail seniors to one that offers both on- and off-site health care services. Aside from nursing home care at its 90-bed Wailuku and 254-bed Kahului facilities, the nonprofit provides adult day health care, home care, long-term care and rehabilitation.

Established in 1946 as a home for elderly men, Hale Makua has grown into one of Maui's largest nonprofits, with more than 450 employees and - according to its financial filings with the Internal Revenue Service - an annual income of $32.9 million in 2013 and $33.5 million in 2014.

"I have had the privilege of witnessing how Hale Makua Health Services' programs and people have delivered compassionate, personalized care to Maui's frail elders and disabled individuals," Krieg said. "We have an extremely dedicated and hardworking team that treats our residents, clients and their families like their own family. They have done a tremendous job in continuing to provide excellent care during a time when reimbursement does not cover the cost of providing care and services."

"He's been a very good administrator," she said last week. "The entire board appreciates Tony.

"Tony has worked closely with the board, employees and the community to improve capacity and coordination of care, working collaboratively to tackle challenges in the current health care delivery system, as well as explore strategies to strengthen the continuum of care from acute to post-acute settings on Maui."

In his three decades of leadership at Hale Makua, Krieg helped plan and build its Kahului facility, she said. He worked to keep Hale Makua as an up-to-date nursing home facility, despite funding, insurance and reimbursement challenges, and he led efforts to create small "neighborhoods" within Hale Makua facilities, giving people a sense of being part "of a small community, instead of an institution," McCleary said.

Krieg also has strived to bridge the gap between acute care received by patients at Maui Memorial Medical Center and home-based care, with or without skilled nursing care, she said.

Krieg has led a workforce that goes beyond what's required of employees to receive a paycheck, she said.

"They do a good job," she said. "But they care about the people that they're caring for."

Hale Makua has been one of the leading agencies in the annual Maui Hotel & Lodging Association Visitor Walk to raise money for island charities, she said.

More than a year ago, Krieg told the board of his plans to retire this year, and that has given the board time to form an executive search committee and contract with Inkinen & Associates to help find his successor.

McCleary said the board has reviewed more than a dozen "incredibly good applicants" and has narrowed its search down to three who'll be interviewed on today. Then, the board will meet Aug. 3 and receive the recommendation of the executive search committee, she said.

Krieg said he expects an announcement of the new Hale Makua CEO will be made in late August or early September, leaving about a month for a transition.

Krieg said that while his pay may sound like "a big number" to a lot of people, it is in line with what top executives earn at agencies with comparable staff sizes, collective bargaining agreements and the complexity and variety of services offered at Hale Makua.

McCleary said that every few years the board studies executive salary levels and looks at state and federal benchmarks for nonprofit executive compensation.

Still, the salary paid to Krieg and the next chief executive officer has been and will be competitive, McCleary said.

Applicants seeking to succeed Krieg have given the board "no grief at all about salary," she said.

Krieg has a bachelor's degree in political science and a master's in public health. He said he plans to offer his education and experience in public health to try to help elected officials and government officials with health and elder health policy development.

"I'm going to try to continue contributing to the community that way," he said.

* Brian Perry can be reached at bperry@mauinews.com.

Above Photo: Hale Makua Health Services CEO Tony Krieg chats with housekeepers Yolen Gumbac (right) and Flor Andrada earlier this month as they bring fresh laundry to the Kahului facility after it was washed at the Wailuku facility.

© Copyright 2016 The Maui News. All rights reserved. This material may not be published, broadcast, rewritten or redistributed.